The Soon Sisters | Combining their love of craft with code

The first thing you’ll notice is the energy and enthusiasm that the Soon Sisters (as we fondly call them), bring to the room. Having joined a variety of Saturday Kids workshops, they have impressed and inspired us with their creative pursuits, their attitudes towards coding, and their wits. Spontaneous and always up for a challenge, they most recently helped the Saturday Kids team with an audio recording as part of our Scratch course revamp.

Here is a trio who is as Saturday Kids as it gets – curious, inventive and resourceful. In our ongoing Kids of Saturday Kids series, we had a chat with these 3 young makers and tech enthusiasts, and their mum Rachel, to learn more about their interests and their perspectives on the importance of learning to code.

The Soon Sisters at a recording for our updated Scratch course

Outside of school, Chuan En (12), Chuan Min (11) and Chuan Wen (10) are all makers in their own rights. Wen’s current hobby is making stuff with hot glue. En likes brush pen calligraphy and making slime, while Min enjoys collecting boxes.

“I’m like a hoarder, a karung guni (rag & bone man). My grandfather has a lot of cardboard boxes and I use them to store my stuff or use them for my craft projects. But, my favourite thing is to categorise my desk! My sis said I’m an OCD 🙂 I’ve also started a “company” with my friend and we named it M&M Productions. Our theme this year is emojis, so all our games are kinda related to that!”  — Min

Coding doesn’t come naturally to them, as they all admitted. As one of our first students when Saturday Kids first started 6 years ago, En (12) recalled her experience at an interactive Christmas card workshop where she had to build a snowman and change the background from a white snowy background to a colourful one. To date, her favourite workshops are Scratch (“because I like doing computer stuff”) and micro:bit, despite that being one of the more challenging courses for her.

On the other hand, Min (11) and Wen (10) expressed their interests on the more hands-on courses, such as littleBits, and as Wen aptly put it:

So much so that they decided to invent a DJ Set when they participated in Maker Faire (the largest DIY and technology event in Singapore) in 2016.

“We were inspired by something similar we saw and thought it was cool, because we like singing and stuff like that. So we used different materials (including straws) to connect the different littleBits together to create the DJ set, and did everything from planning, to designing, to decorating with stuff we bought from Daiso. And with a little help from the Saturday Kids team!” “We even had a rap for it! Which we composed and performed in front of everyone.” Wen quipped.

“The DJ set sounded really weird though, like a mouse squeaking. And it broke down every 30-min!”, Min recalled with a laugh. 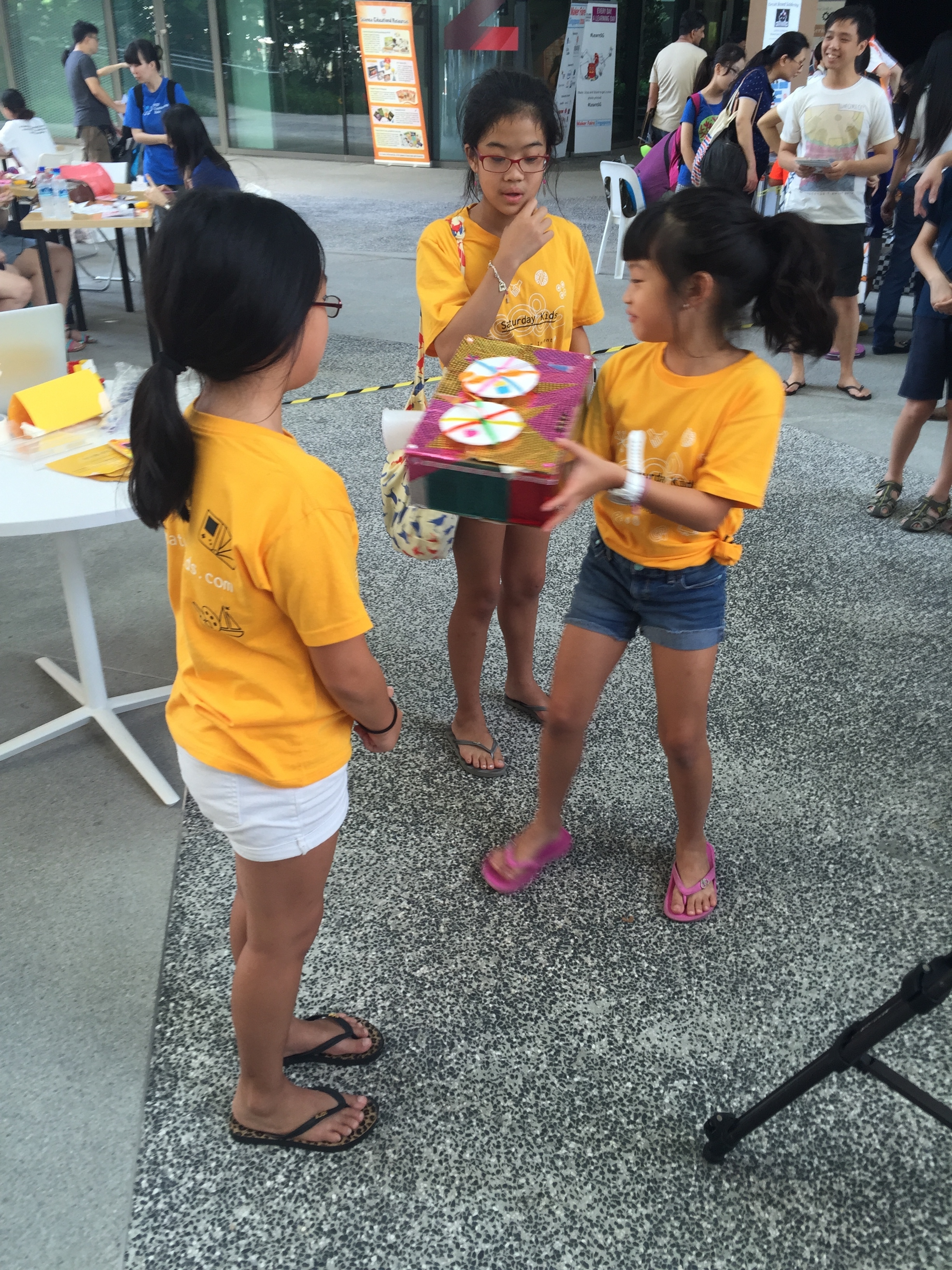 Part of the fun was also to experience other people’s projects at Maker Faire. Memorable ones that made an impression on them included 3D printers, escape rooms with different obstacles, and slime synthesizers – and simply to witness what others kids could build and invent with their imaginations.

We often have siblings joining us for our workshops and it’s interesting to observe the dynamics and how siblings learn together. But how was it really like in their perspectives? “Mixed feelings!” Min exclaimed. “I don’t like it because sometimes i want it to be my own thing so I can make friends with other people (and I don’t want my sister to embarrass me). But it turned out that I really enjoyed having my sister around in the same class.”

At Saturday Kids, we believe that our students don’t just learn to code, but they code to learn. En added that beyond learning how to code, she learnt how to think practically. “If you want someone to buy something from you, you need to think about what people need, how they’ll use it and how it makes their lives easier.”  Plus learning to solve problems, to empathise, and even just to be better at typing, Wen and Min commented.

We learnt physics and chemistry in school not because we were going to be scientists, but because we needed to have a basic understanding of how the universe works. The universe our kids live in today runs largely on tech. Learning coding (or more generically computer science) is learning how the digital world works and learning to use computational thinking to solve problems. And these young minds get it. Min had this to add: “Coding is very important and the technology is present in everyone’s daily life. The world is developing very fast and robots are going to take over. Without technology there’ll be no WhatsApp, and no Instagram.”

So if the Soon Sisters could invent anything, what would it be?

Wen: I’d make a hologram that is supercool and has unicorns in it.
En: I’d invent a chip that you can plant into yourself. It’ll be able to track the good and the bad deeds, and awards points based on that. The more points you earn, the higher your level will be.
Min: A time travel machine! I could fix almost everything. If I had a fight with a friend, I can go back in time and ignore that friend, or just don’t talk to the friend. I also want to have this potion, like I read in this book The Land of Stories, where you can go into a book, see the characters and make books come to life. Now that’d be cool 🙂

And we of course, took the opportunity to speak with Rachel to hear it from her perspective.

Saturday Kids: Your daughters have such incredible energy and personalities, it’s been really fun interviewing them. Have they always been like that?

Rachel: They’ve always been very expressive. As a family, we communicate a lot and discuss a lot, although it gets really noisy sometimes. They like to talk, and it’s always interesting to put a question to them and see where their brains run off to, and the kind of conversations we can get because of that. We think it’s important to challenge them, and their father always tell them that they have to ask questions, and not be afraid to do so.

Saturday Kids: Why did you decide to send them for coding workshops?

Rachel: My husband and I both believe that coding is the way of the future and is something that in their generation, is going to be completely common. It will help you in life and in thinking about things – what the next wave is, or when AI (Artificial Intelligence) rules the world. Their father always talk to them about what jobs they think that AI cannot replace, and what our value add in the world is. So I find that it is quite meaningful to learn coding to better understand technology.

Saturday Kids: How does learning to code challenge them?

Rachel: I think a general attitude they have (towards most problems in life) is to learn how to fix it, and not to give up easily. When it comes to learning how to code, the more difficult courses are challenging that way and have made them more resilient. They know that they when learn to code, it’s not something that comes naturally, yet it challenges them and they always end up having a good time. The teachers make it really fun for them to think about how to solve problems, encourages them, and don’t make it so daunting that they give up altogether.

Saturday Kids: How did you cultivate their love for craft and the spirit of creativity?

Rachel: We don’t have a lot of toys. We actually don’t buy toys as we moved around a lot due to work since they were young, and hence do not have a lot of possessions. So we would save things like toilet paper rolls, cardboard boxes, and making these available to them. I always make sure that I have a craft cupboard, and encourage them to not be afraid to make a mess. Letting them do what they want to do, make stuff, paint, and mess up things. If the plan is not to have them on an electric device all the time, then you got to offer an alternative, and in our case, it’s craft. My 2nd (Min) and 3rd (Wen) especially find it therapeutic to be making things and creating things. You’ll be amazed by the things they can come up with. Of course my house looks like Karung guni (rag & bone), but it’s really cool to watch them create.

Saturday Kids: We love the chemistry amongst the 3 of them 🙂 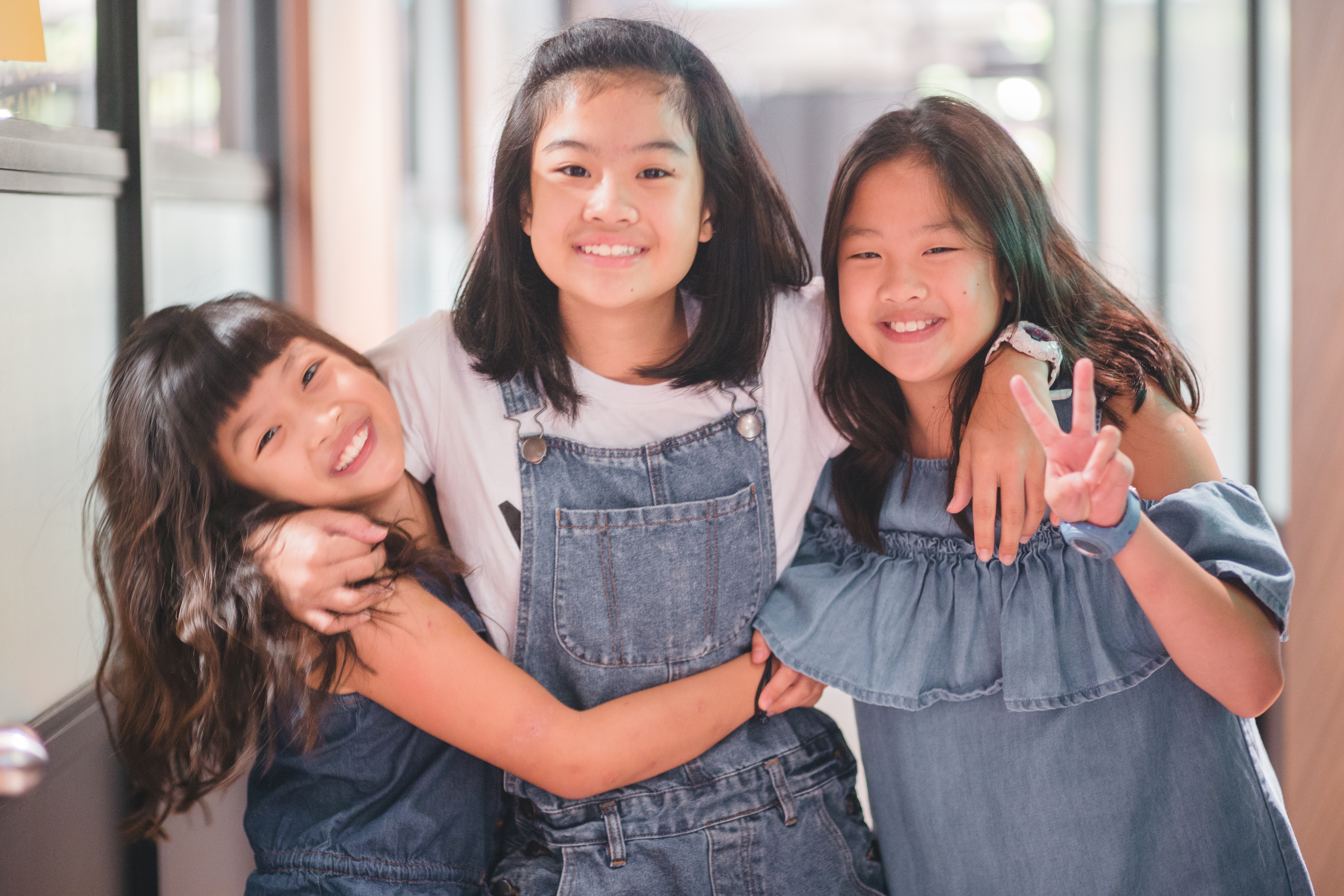 Thank you Rachel, Chuan En, Chuan Min, and Chuan Wen for spending time with us and for being such a great sport as always!

At Saturday Kids, our students don’t just learn to code. They code to learn. If you have a story to share with us about how your kid’s experience was, we’ll be happy to hear from you! Please get in touch at [email protected]

Get to know the new big kids on the block: Meet the new heads at Saturday Kids!

Coding for Preschoolers – a peek into Bees & Bubs: Buzz with Beebot and ScratchJr

This March School Holiday, Explore The World Of Tech, Art And Design With Saturday Kids