Saturday Kids founder & CEO, John Tan, was at the FestivalForGood 2018 this past weekend to share his thoughts on empowering our children through play, and some stories of kids who are making a difference. No worries if you missed it, here’s the full speech below.

Hi everyone, my name is John and I’m the founder of Saturday Kids. Thank you RAISE for organising this session, and for inviting me to be a part of it. I think it’s safe to assume that most of you here care about about children as much as I do and want to enrich and make the best of their childhoods, since you’re here on this Saturday afternoon. I hope you find the perspectives shared to be useful.

People tend to know us (Saturday Kids) as a digital literacy school for kids. That is correct to a certain extent. But what motivates us at Saturday Kids goes beyond that. At its core, we’re using this as a platform to help kids become curious, inventive and resourceful individuals. To that extent, you wouldn’t be far off to call us a curiosity school for kids.

Today I want to share with you all why we should change the way we view play, how kids are inventing the future, and why like-minded organisations should better support each other as we address a common goal.

CHANGING THE WAY WE VIEW PLAY

We got connected recently to a lady named Victoria who started a company called The Bright Life. Her work focuses on educating parents on the Montessori philosophy and we draw a number of parallels between her principles and ours – and I’ve highlighted some of her thoughts below.

For many of us, we are conditioned to think and feel that play and learning are two separate activities. Study first, and then play later. But the Montessori philosophy offered a different perspective, that a child’s work IS to play.

In a Montessori classroom, a child is allowed to work on whatever they choose to, at their own pace, free from distraction. This individualised way of working allows the child to fully explore the material at hand, on their own terms, and at a level they are satisfied with. It enables a beautiful unfolding on their curiosity and need for mastery of the particularly skill. While the work they do may look like play, it is instead, meaningful work to the child.

Play is an excellent way to build a child’s confidence and independence and is one of the core principles at Saturday Kids. Play enables innovation (new things, invention of new games with the same toys), improvisation (working with limited resources/toys, being spontaneous), imagination (coming up with new characters for the story), builds focus (e.g. when they’re engaged in a puzzle) and interaction (with others, negotiating, interpersonal skills). It enables us to empower our children by allowing them to achieve a certain level of mastery of their physical, emotional and mental environments.

Play is not just laughter and having fun (although that is an important part of play). Not just the activity. It’s the attitude of testing, experimenting and trying, which leads us to two other core principles at Saturday Kids. Learning happens by doing. Failure is reframed as iteration.

The sum of this is giving children confidence and independence all through adulthood. If we want our kids to stand up for what’s right, fight for what they they believe in, and help those whose voices cannot be heard, it will take a truly confident person to do so. And a lot of that start from childhood. That’s why it has to start with children. That’s why we have to let them play.


EMPOWERING KIDS TO INVENT THE FUTURE

Loris Malaguizzi, founder of the Reggio Emilia approach, created a poem called “The 100 Languages”. Reggio Emilia is a small Italian village that decided to revolutionise education after the WWII. Instead of writing a vision plan, a strategy, they decided to write a poem – which serves a metaphor for the extraordinary potential of children, and refers to the many ways a child has to express himself/herself (and digital literacy is just 1 of the many). 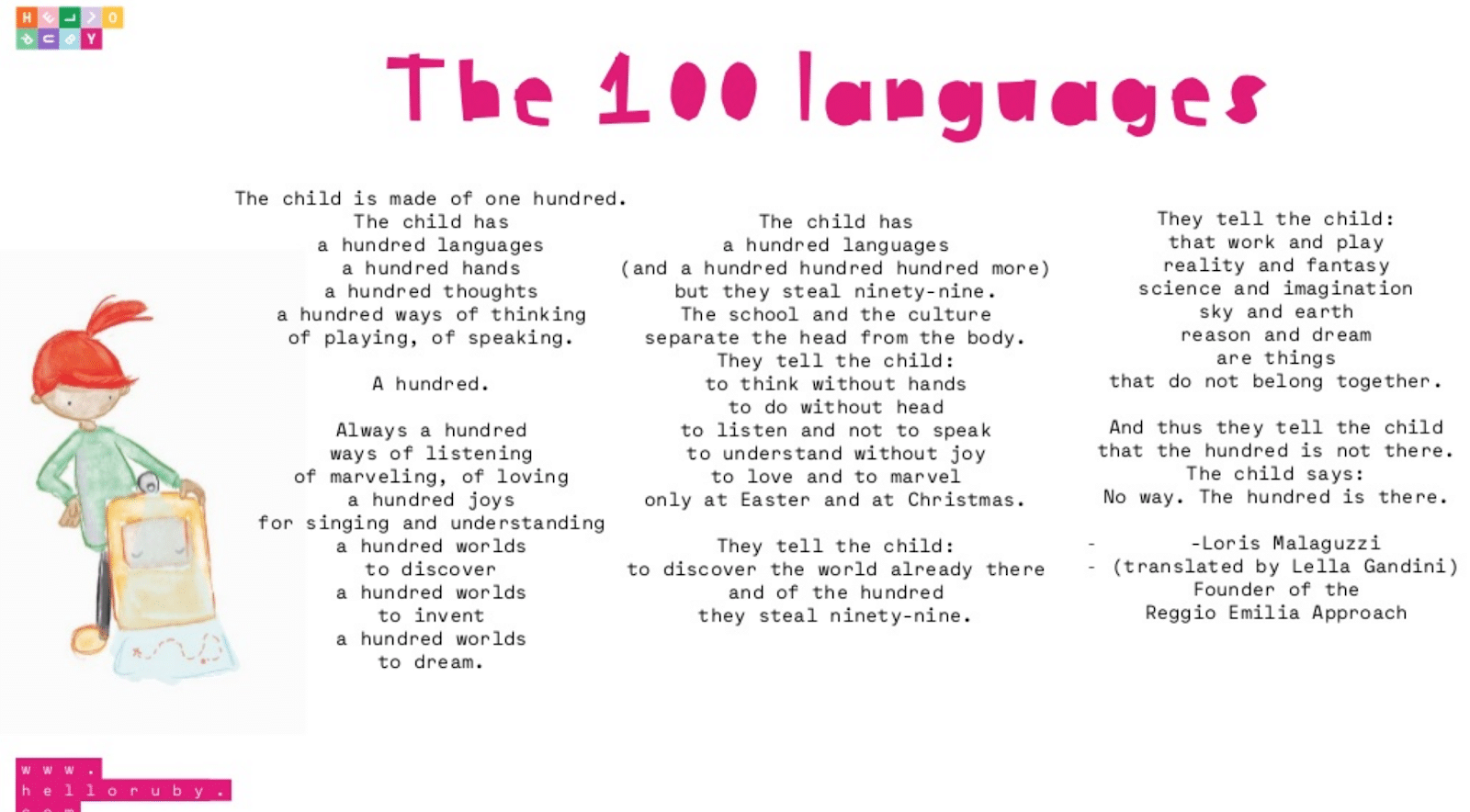 At Saturday Kids, we want to provide kids a platform for them to creatively express themselves and have witnessed how empowering it is when a child takes charge of his/her own learning, becomes intrinsically motivated to learn – through constant tinkering, experimenting, building, making. Here are a few stories:

Isabel is our youngest ever Teaching Assistant. She attended our Scratch camps last Nov/December and left a lasting impression on all of us.  After she completed the first course, she actually went on to build something else based on what she learnt – an animation based on her pet hamster, Cheddar. She made a whole cartoon about him and his adventures.

Caleb (11), who built an app to help his grandpa

Caleb, was a student at our mobile app camp last year. During the course of the camp, he identified a problem that his grandfather was struggling with.  With Caleb and his 2 brothers all in different schools, figuring the route of picking them all up was just too much planning for his granddad.

So Caleb built his own Family Uber app to help his Granddad to plot his route on Google Maps without having to individually key in the location and fiddle around on Google Maps every time. Caleb made an app that was genuinely helpful to his grandfather; he identified a problem that his grandfather was facing and built an app to address it. That’s the kind of thinking we want to encourage in kids these days.

Sean (12) from Code in the Community

First let me tell you about Sean. He’s 12. He attended Code in the Community, a Google-sponsored initiative to bring free coding classes to 3,000 young Singaporeans from less well-to-do backgrounds.

So Sean was introduced to coding through CITC. After the program, he became inspired to learn new coding skills on his own and was one of the students offered a seat at our Python camp this June. Because he had learnt so much on his own, he was way more advanced than the rest of the class and ended up spending most of his time helping the other kids instead. Saturday Kids has a formal TA programme where we invite kids with advanced coding skills to assist in the classroom and we pay them for assisting. We are planning on inviting Sean back this December as a Python teaching assistant. Not only do we want to give Sean his first taste of coding, we want to write him his first pay cheque as well.

If we believe that the future belongs to our children, equipping them with not just the skills but the right values and mindsets to approach this will be more valuable than ever. That includes getting kids curious, and asking not just the whys, but also the why nots. We were all born curious (you just have to look at the little ones around you) and ironically we kind of got educated out of it. As Mitch Resnick (founder of Scratch) observed, children in kindergartens these days spend more time with math worksheets and phonics flashcards than building blocks and finger paint – and kindergarten is becoming more like the rest of school, when in fact, the rest of school (even the rest of life) should be more like kindergarten.

That is why at the core of our mission at Saturday Kids – is to get kids curious, inventive and resourceful. For we believe that with curiosity, kids will become intrinsically motivated to learn, and from that intrinsic motivation comes creativity and imagination – skills that these kids will inevitably need to navigate and to change the world (for the better).

While we are a digital literacy school for kids, we will also be the first to acknowledge that humanities and liberal arts are key to a future dominated by tech – for technology is created by, and for people. So is the importance of having kids spend enough time outdoors and having nature as the teacher.

For real change to effect, it will take more than any one organisation or individual – children, parents, teachers, schools and society need to come together. One possible such place  we hope this happens, is our facebook group Curious Kids Have More Fun!

And that’s why we really appreciate having a platform like this and to participate in these conversation – to reimagine what learning looks like.