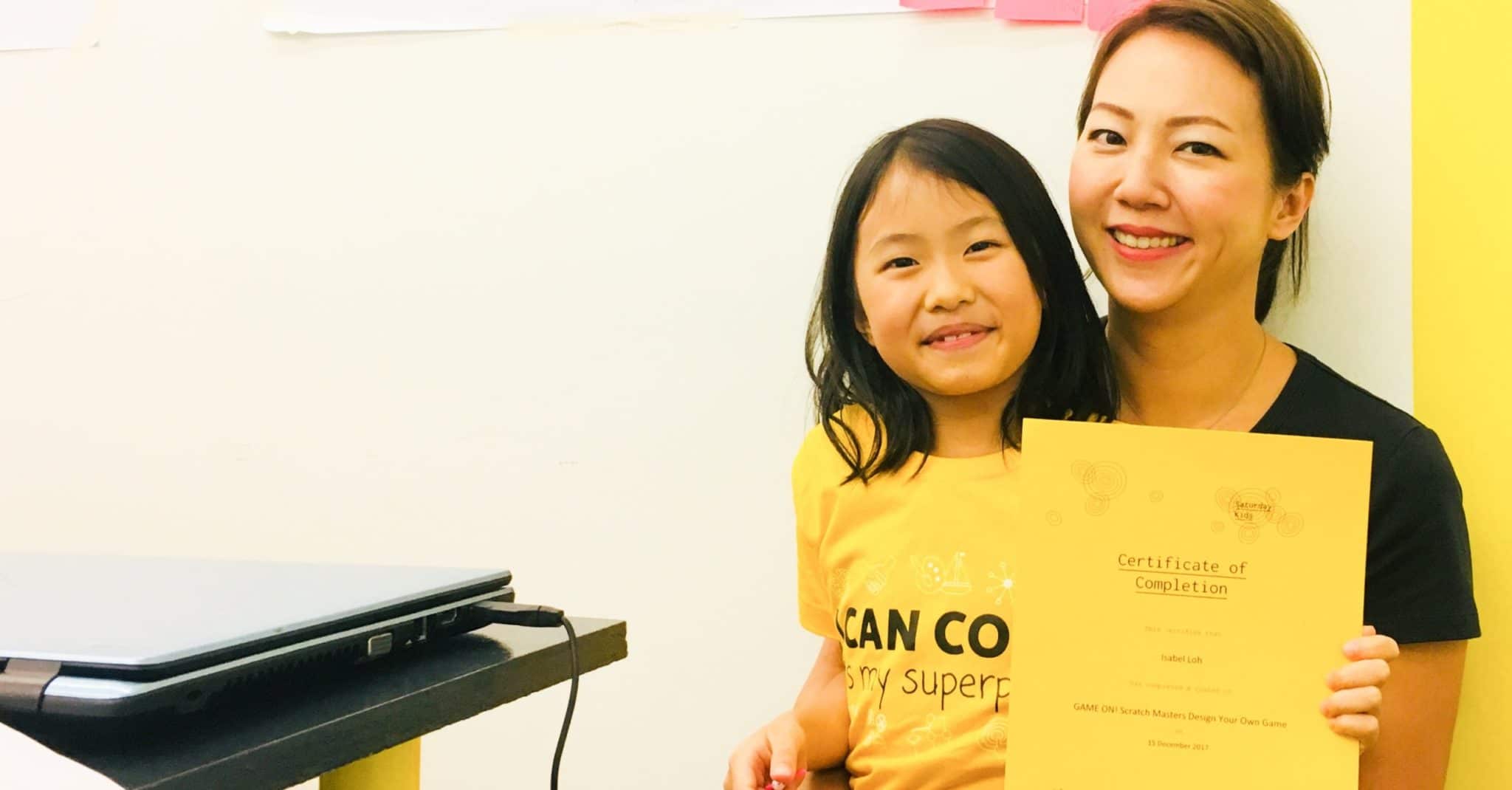 The Kids of Saturday Kids

In the last few years, our team here at Saturday Kids has been inspired by many students who have joined our coding classes, each exemplifying what Saturday Kids stands for – being Curious, Inventive, and Resourceful. In this series of conversations with our students, we look at each of their individual journeys and also hear what they have to say about their learning experience so far.

One of our newest and most enthusiastic kids, Isabel has been coding for only about 2 weeks but is already light years ahead of her peers with her passion and love for coding. She first joined us for our beginner course (Start With Scratch), and has just completed her second course (Game On) last week. She talks to us about how she started off coding, the inspiration behind her games and some grand plans for the future.

“You have to see where your kid’s interests lie. I know that from very young age, Isabel’s quite special in that she’s a very very logical kid and has very good puzzle solving skills and I thought that this is quite a good way to channel those interests. I think that it’s good that she’s played the games and now if you reverse the tables to actually create the games, it’s a bit more meaningful and it’s engaging as well. It also helps her with problem-solving and creativity. I would encourage parents to give it a try and see if their kids like it but not to force it if it’s not for them.” – Yu-Lin, Isabel’s mum

Saturday Kids: So Isabel, tell us a bit about your interests – what do you like to do when you’re not in school?
Isabel: I like to draw, make puzzles, play with my brother, and I like to code because it’s very fun!

Saturday Kids: Do you still remember your first coding class?
Isabel: Yes, it was only one week ago! At first I thought that I won’t make any friends but everyone in class was very talkative so in the end I made friends with all of them! I also thought everyone else had done some coding before and I was the only one who didn’t know but actually everyone’s a beginner.

Saturday Kids: What was the most difficult part of starting to learn how to code?
Isabel: I didn’t know how to do stuff that was very important in my game. Like making the object move around.

Saturday Kids: And the most enjoyable part of it?
Isabel: It’s fun and relaxing, and it’s not too much of a rush. At the end of each week you can create your own game and show it to all your friends! During the classes, the instructor was very patient and guided us throughout. Everyone in class also helped each other. I really enjoyed it. I want to learn micro:bit next!

Saturday Kids: Has learning coding helped you in other areas of your life e.g., school?
Isabel: It helps me to not be so stressed. It relaxes me and lets me focus on other things.

Saturday Kids: That’s fantastic to hear. It’s great to see you articulating your creative ideas through coding and that it gives you a sense of peace and focus. It’s still early days, but do you have any thoughts on what you eventually want to do with your coding skills?
Isabel: Maybe I’ll design games (and maybe a gamer too). Because I like playing games and exploring how to play them. I’d come up with a game and test it to see if it’s working. I’ll ask my family members if they like it, if all of them say yes, then I’ll post it.

Saturday Kids: What are some of your favourite games?
Isabel: Minecraft, YouTube, Roblox…I also watch a show on Nickelodeon, it’s called Game Shakers and they actually create real games on the show and they’re very fun to play with. I’ve also downloaded this game called OctoPie. There’s an octopus and it’s something like a slingshot so you’re supposed to shoot the pizza to the people otherwise they get angry. If you get 3 angry people, then you lose. But if you don’t make people angry and you keep giving them
pizza until you reach the top of the whole building, you win. Then you earn some money to buy your next costume!

Saturday Kids: That sounds really fun. Do you think you’d like to create a game that one day people all around the world will be playing on their iPads?
Isabel: Yah!!! I want to put my games on the iPad but I don’t know how because it’s only on Scratch now.

Saturday Kids: Maybe that’s something you could learn how to do next. But until then, do you have more ideas for new games that you want to make?
Isabel: Not yet…usually I just ask my mummy to name something and then I’ll make up a game, related to that subject.

Saturday Kids: Yes, I’ve heard of this special game you and your mummy play – she gives you one word and you think up of a game related to this word? Can I play as well please? I’ll give you a really random word: Pineapple.
Isabel: You’re supposed to chop as many pineapples as possible before they go into the lava. And you have to have at least below 5 pineapples in the lava and above 10 not in the lava to win.

Saturday Kids: I can’t believe you just came up with that on the spot! Okay, if you could invent absolutely anything in the world, using your coding superpowers, what would that be?
Isabel: A TIME MACHINE! Then if I do something wrong I can go back into time and fix it! And I can also go into my future and see if it it’s bad and if it is, I’ll see what made it bad and try to change something in the past. I also want to make a cure for cancer. Like make some kind of machine to go in, and it’ll cure the cancer while you sleep.

“After she completed the first course, she actually went on to build something else based on what she learnt – an animation based on her pet hamster (Cheddar, a little dwarf hamster). She made a whole cartoon about him and his adventures.” — Yu-Lin, Isabel’s Mum

Saturday Kids: I love that. So now if a friend asks you for advice on what coding is like, what would you tell them?
Isabel: That it’s very fun and you should never be scared to do something you love!

Saturday Kids: But what if they’re not sure if they’re going to like it or not?
Isabel: Then they should just do a trial and see if they like it or not. If they like it, they continue but if they don’t like it then they just stop. I knew 100% that I’d like it because I like computers and digital devices! It’s fun and it’s relaxing if you’re not forced to do it. But you don’t have to feel bad if you say no!

And let’s hear it from Isabel’s mum:

Saturday Kids: How did you end up signing Isabel up for coding classes?
Yu-Lin: Actually she asked for it. We had holiday plans in December which were cancelled at the last minute so I was looking for camps for her to attend just to occupy her time. I was asking her about sports camps, arts camps and she’s the one who said she wanted to learn coding.

Saturday Kids: Have you seen a difference in Isabel since she started the class?
Yu-Lin: Well she only started 2-3 weeks ago but she’s very very passionate about it. I can tell because after she comes back from class, she will ask to go on the computer and she will continue coding. After she completed the first course, she actually went on to build something else based on what she learnt – an animation based on her pet hamster (Cheddar, a little dwarf hamster). She made a whole cartoon about him and his adventures. And that was just after the first week! So I know okay, she’s quite serious about this so I decided to sponsor her for Level 3 and 4.

Saturday Kids: That’s very promising. Do you have any advice for other parents who are looking to enrol their kids in after-school classes?
Yu-Lin: I guess you have to see where your kid’s interest lies. Like I know from very young she’s quite special in that she’s very very logical kid and has very good puzzle solving skills and I thought that coding is quite a good way to channel those interests. I think that it’s good in that she’s played the games and now if you reverse the tables to actually create them, it’s a bit more meaningful and it’s engaging as well. It also helps them with the problem-solving and creativity. I would encourage parents to give it a try and see if their kids like it but not to force it if it’s not for them.

At Saturday Kids, our students don’t just learn to code. They code to learn. If you have a story to share with us about how your kid’s experience was, we’ll be happy to hear from you! Please get in touch at [email protected]