Why Grit Is Key | How To Raise Kids with Grit

Just finished reading Grit – Why Passion And Resilience Are The Secrets To Success by Angela Duckworth, a recipient of a MacArthur Fellowship, sometimes called the “genius grant”. Duckworth ended the book with this quote

If you define genius as working toward excellence, ceaselessly, with every element of your being – then, in fact, my dad is a genius, and so am I, and so is Coates, and, if you’re willing, so are you.

The book is premised on a simple idea – that success in life comes from showing up and not giving up. The Grit Scale is a term readers come across often in the book. It is a test that measures the extent to which one approaches life with grit. According to Harvard psychologist William James, “the human individual lives usually far within his limits; he possesses powers of various sorts which he habitually fails to use.” What makes this a real shame is the fact that effort counts twice.

Effort builds skill. At the very same time, effort makes skill productive. The actor Will Smith has thought a lot about talent, effort, skill and achievement. He once made this observation

I’ve never viewed myself as particularly talented. Where I excel is ridiculous, sickening work ethic.

Or as the writer and director Woody Allen puts it

Eight percent of success in life is showing up.

Growing Grit From The Inside Out

Growing Grit From Outside In

What can parents do to encourage grit in their child? 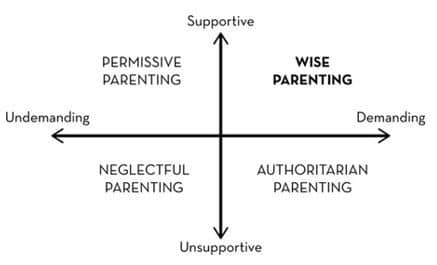 There’s no either/or trade-off between supportive parenting and demanding parenting.

The diagram above suggests that there’s not one but two parenting styles continuum. Wise parents are both supportive and demanding. They appreciate that children need love, limits, and latitude to reach their full potential. Their authority is based on knowledge and wisdom. In practical terms, supportive and demanding parents were “models of the work ethic in that they were regarded as hard workers, they did their best in whatever they tried, they believe that work should come before play, and that one should work towards distant goals.” Further, “most of the parents found it natural to encourage their children to participate in their favoured activities.”

Duckworth fervently believes that kids thrive when they spend at least some part of their week doing hard things that interest them. A study conducted by the Personal Qualities Project concluded that follow-through – purposeful, continuous commitment to certain types of activities – is the best predictor of success in life. The particular activities to which students had devoted themselves didn’t matter. The key was that students had signed up for something, signed up again the following year, and during that time had made some kind of progress.

In Duckworth’s family, they live by the Hard Thing Rule. It has three parts.

Duckworth recommends the Hard Thing Rule for parents who would like to encourage grit without obliterating their children’s capacity to choose their own path. I’m learning Japanese right now. That’s my hard thing. Cory (4) and Sienna (2) are probably a little too young, but I’m going to make Summer (6) and Camper (7) pick a Hard Thing and work on it. It’s ok for them to cycle through different hard things. Duckworth’s older daughter cycled through half a dozen before settling on viola.

I learnt from reading Grit that ‘parenting’ derives from Latin and means ‘to bring forth’. This is my wish for parents.

Instead of exam smarts and self-entitlement, how about bringing forth curiosity, purpose, compassion and hope?

Why Failure Is Not Always a Bad Thing

Because Mums make the world go round – Happy Mother’s Day!